It's that time again... We're preparing to head up to Edinburgh Fringe, where we'll be highlighting shows that pass the Bechdel test, celebrating women on stage, championing gender-conscious and female-led theatre, and doing all we can to help you find shows where women are not completely absent.

If you're up at the Fringe, make sure you look out for our stamps and stickers on posters all around the city (and let us know if you see a show that we haven't highlighted yet). 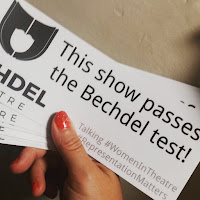 (PS podcasting, stickering, being in Edinburgh all costs £££ and Bechdel Theatre receives no public funding, if you want to help us to support the improvement of gender representation on stage, you can make a donation, or become a Patron.) 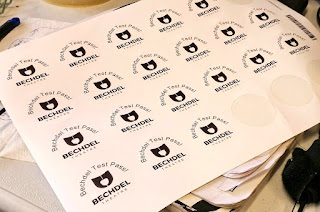 Now, onto the recommendations! These are some Edinburgh shows that we reckon will *probably* pass the test, and definitely sound like they're worth seeing. To help you plan what to see, and when, we've organised them by venue and time-slot - because we know how hectic Fringe-going can be.

When we see shows we REALLY love, we'll be adding them to our list of Edinburgh Fringe #FeministFaves - so keep an eye on that list too - it's shorter but has more detail! 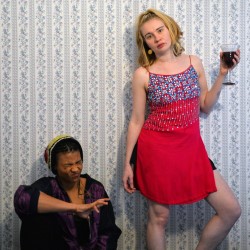 DIGS @ Pleasance Courtyard 13:45
Devising duo Theatre with Legs have created this dark comedy about Generation Rent, overdrafts, anxiety and surviving their 20s. One of our #FeministFaves.

Buzz @ Pleasance Courtyard 15:30
A new musical about the history of vibrators, what more do you need to know? Catch this before it's success makes it impossible to get tickets for.

Offside @ Pleasance Courtyard 15:40
Fresh from a successful tour, Offside is a poetic drama, co-written by Sabrina Mahfouz and Hollie McNish, based on the lives of female footballers, from the 1880s up to the present day. One of our #FeministFaves.

This Really Is Too Much @ Underbelly Cowgate 15:20
Gracefool combine dancing with dark comedy to delve into a world of farcical stereotypes and preposterous power struggles, wrestling with gender, identity and social convention.

Out of Love @ Summerhall Roundabout 13:25
A new play by Elinor Cook about the close friendship between two girls as they grow up and take different directions in adulthood. One of our #FeministFaves.

A contemporary all-female circus about the reality behind the flawless smiles and perfect execution: showcasing the wobbles, the pain, and the real cost of aiming for perfection.

Box Clever @ Summerhall Roundabout 16:40
A new play about one woman’s experience of a refuge and a mother’s commitment to do the best for her daughter. One of our #FeministFaves.

Love+ @ Summerhall 19:10
Love+ is a one-woman two-hander about the inevitability of human/robot relationships by Irish theatre company Malaprop.

Eggs Collective Get A Round @ Summerhall  21:10
A wayward exploration of friendship, kindness and belonging that spills out towards its audience. Eggs Collective wonder if the basic principles of a good night out might make the world a better place. One of our #FeministFaves.

Dollywould - Sh!t Theatre @ Summerhall 21:15
Sh!t Theatre F*cking love Dolly Parton, and so do we. We also loved last year's offering from this award-winning performance duo. One of our #FeministFaves.

The Vagina Dialogues – The Völvas - Upper Church Summerhall 12:30
A cabaret-style theatre and variety piece that includes a series of episodic monologues, duologues, and movement pieces set to live music. 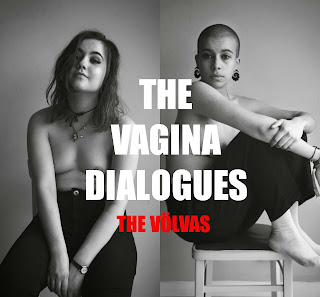 Siblings @ Gilded Balloon Teviot 23:30
A raucous journey into the absurdity of an all too familiar world. Suitable for anyone who has or has seen a sister. ‘Watch out for these gals’ (Jennifer Saunders). ‘Hilarious’ (Dawn French). ‘Really funny’ (Miranda Hart).

Fémage à Trois @ Gilded Balloon at Rose Theatre 15:30
A brand-new trilogy of independent stories, told by the women central to them, as they battle with their demons.

Mother's Ruin: A Cabaret about Gin @ Gilded Balloon at Rose Theatre 18:15
A Cabaret about Gin: does what it says on the tin. Also the two performers promise that a g&t is included in the ticket price. Bottoms up!

Mouthpiece @ CanadaHub King's Hall
Two performers express the inner conflict that exists within a modern woman’s head: the push and the pull, the past and the present, the progress and the regression.

Under my Thumb @ Assembly Roxy 16:10
In a dystopian present, five women are imprisoned for crimes against society. Shortlisted for the inaugural RED Women's Theatre Awards in 2016.

Hot Brown Honey @ Assembly Roxy 21:00
Undoubtedly the fiery-est feminist hit show of last year's Fringe, the system-smashing cabaret burlesque show is back, with "lashings of sass and a hot pinch of empowerment". Don't miss it. One of our #FeministFaves.

Britney in: John @ Bedlam Theatre 18:30
The team behind last year's brain-tumour comedy are back with a sketch show about a road trip across America. One of our #FeministFaves.

We Are Not Afraid @ Just The Tonic at The Caves 18:45
Roisin & Chiara are Pippa's favourite ever comedy double act. Surreal storytelling 'improvising geniuses' bring to life a plethora of irresistibly well-observed character vignettes. One of our #FeministFaves.

Scene @ Paradise in Augustines 16:45
Two women decide to write a play about their interracial queer relationship. Funny, honest and explosively entertaining, this piece of new writing is an exploration of race, gender, sexuality, family and what it means to love someone who doesn't look like you.

Hotter @ Paradise in Augustines 22:45
Hotter asked everyone, from grannies to drag artists: 'What gets you hot?' Joined by the voices of women and non-binary people interviewed around the country, two women are embarking on a battle against embarrassment using sketch theatre, song and dance.

Manic Pixie Dream Girls @ Laughing Horse at The Counting House 01:00 (from Aug 13)
This show bills itself as a late-nght antidote to "Pale, Stale, Male Comedy". Hosts Sophie Duker and Erin Simmons share the stage with a different guest each night. We LOVED these Dream Girls last year, and can't wait to see more from them.

BECHDEL FRIENDLY SOLOS
Stand-ups and one-woman shows that make it well worth stretching the limits of the Bechdel test to include. Because sometimes quality is as valuable as quantity.

Njambi McGrath: Breaking Black @ Laughing Horse at the Counting House 12:05
Spat on and told to go back to the jungle, Njambi explores the patriotism of immigrants in their new home and dwells on her own experiences as a Kenyan-born UK resident. She is Breaking Black and loving it.

Half Breed @ Assembly George Square Theatre 12:20
Trust me, around here I’m about as black as it goes…’ a partly autobiographical dark comedy by Natasha Marshall, presented by Soho Theatre and Talawa Theatre Company.

Quarter Life Crisis @ Underbelly Cowgate 14:40
Yolanda Mercy uses original music and spoken word in her quest to achieve adulthood. Listen to our interview with Yolanda and director Jade Lewis on our podcast. One of our #FeministFaves.


Dust @ Underbelly Cowgate 16:40
Milly Thomas, has written and performs this solo show about a woman forced to watch the aftermath of her suicide and its ripple effect on her family and friends.

Georgie Morrell: Morrell Highground @ Underbelly Med Quad 15:00
Can Georgie save the NHS? Are NHS doctors hotter than private ones?! Why can't disability be mega LOLz? Taking you through her bizarre and hilarious journey, find out how Georgie sees disability through her one eye! One of our #FeministFaves.

Athena Kugblenu: KMT @ Underbelly Med Quad 17:50
KMT – acronym for the Caribbean Patois expression 'kiss mi teeth', a mouth gesture used to show annoyance – is a debut hour that finds a new way to talk about politics, class, race and identity at a time both ends of the political spectrum couldn't be any further apart.

A Robot in Human Skin @ Underbelly Med Quad 20:30
Nicole Henriksen's fresh, truthful, and heartfelt look at mental health and the ways we treat and understand it. Come take a look into a different mind and see how you like the ride. 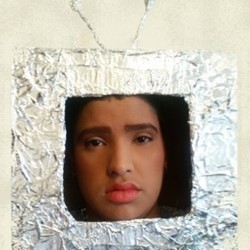 Ava Campe and The Psychic Duck @ CC Blooms 15:00
A show about spirit waterfowl, wonderful women and a fairground mystery that occured on the Welsh coast many moons ago. DIVA said Ada Campe ‘resembles an unhinged super-villain’, and we agree (in the best possible way). One of our #FeministFaves.

Nina – A Story About Me and Nina Simone @ Traverse Theatre (times vary 5-13th Aug)
Josette Bushell-Mingo intertwines stories from her own life and career with Nina Simone's story and music from a live band.

Eggsistentialism @ Summerhall 13:00
Looking down the barrel of her final fertile years, one modern woman goes on a comical quest to uncover the ifs, hows and crucially the whys of reproducing her genes.

Salt @ Summerhall Northern Stage 14:30
In February 2016, two artists got on a cargo ship to retrace one of the routes of the Transatlantic Slave Triangle – from the UK to Ghana to Jamaica and back. This show is what they brought back. One of our #FeministFaves.

Award-winning Nilaja Sun breathes life into a vibrant mix of Lower East Side residents in her latest solo show. 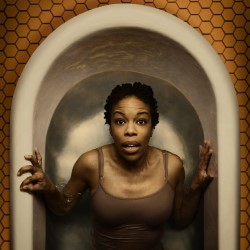 Workshy @ Summerhall 21:10
Looking through the lens of labour, Workshy is a powerful and honest portrayal of the relationship between class and aspiration. One of our #FeministFaves.

Rachel Creeger: It's No Job for a Nice Jewish Girl @ Black Market 13:40
With a face that shouts ‘Xmas’ but a soul that screams ‘Hanukkah’, Rachel Creeger has always felt like she has a foot in two worlds. A debut solo stand-up comedy show exploring the drive to fit in, with a bit about being a pop star. One of our #FeministFaves.

Mae Martin: Dope @ Laughing Horse at City Cafe 20:00
Mae shines a light on that one weird shrimp we all have in our brains that is happy to pursue short-term pleasure, despite knowing the long-term negative consequences. She asks: who are we when we're not addicted? One of our #FeministFaves.

Good Girl @ Just The Tonic in the Mash House 13:00
Frank, funny debut storytelling from Naomi Sheldon, in association with Old Red Lion Theatre and Bruised Sky Productions. A bold, provocative look at the darker side of being a good girl. One of our #FeministFaves.

Twayna Mayne: Black Girl @ Pleasance Courtyard 16:45
Twayna Mayne is a strong black woman with an extraordinary back story. In her highly anticipated debut hour, join this truly unique rising star as she guides us through a lifetime of labels and contradiction. 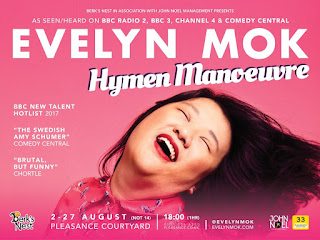 WOMEN WITH MALE SIDEKICKS
These shows have 1 m & 1 f on stage, but are excellently female focussed, and well worth a watch!

London Hughes: Superstar @ C Royale 19:15
London mixes her love of dance, television and comedy as she explores the crazy world of entertainment and examines the hot topic of diversity in the industry in Hughes’s signature energetic, honest and non-conformist style.

Seven Crazy Bitches @ Assembly Hall 19:00
Join the Diva on a budget as she guides you through the Seven Ages of Woman. Pit stops include seduction via Kate Bush, an interview with the woman who lived in Prince's head, and finding out how many two pence pieces a man can insert up his foreskin.

You've Changed @ Summerhall 20:30
Through song, dance, hard-won wisdom and hilarity, You’ve Changed shines a light on the ins and outs and ups and downs of transitioning. Challenging the idea that genitals equal gender, Kate literally bares all, getting her own out on the proverbial table. She’s changed, that’s clear, but have you?


That's all for now!

Subscribe to our podcast for more extensive chats, reviews and interviews.

Become a Patron for even more updates and exclusive videos and podcast extras.

Seen an amazing show that we haven't covered yet? Let us know!

Posted by Bechdel Theatre at 06:02