This month we're in Edinburgh, awarding Bechdel test passing shows with stickers. Keep your eye out if you're looking at a wall of posters and want to choose something with women at the forefront to break up the overwhelming maleness of most of the festival scene. If you see this logo you can be sure that women are being represented. 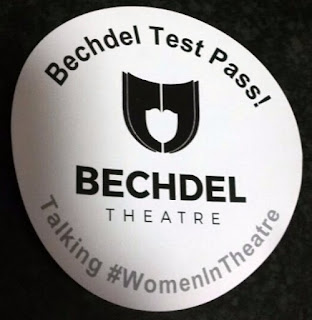 For ongoing up-to-date tweets about Bechdel test passing shows, in Edinburgh and beyond, follow us on Twitter @BechdelTheatre, but if you're planning your festival calendar and want some solid advice on which shows pass the test to help you cram your month with women on stage, look no further...

(Where possible we've included indicators of where you can catch the shows if you're not in Edinburgh, so have a look even if you're not fringe-ing this year.)

This list of recommendations is uncomprehensive, and while lots of these shows are heartily endorsed, we have included as many as we could verify as Bechdel test passing (by one of a team of trusted Bechdel-testing fringe-goers). Although there's a slight bias towards plays and performances that address feminism or gender-related issues, there are plenty where the main topic at hand is something unrelated, with a wide range of styles from drama to comedy, cabaret and musicals. We urge you to check out them all and make up your own minds about whether they were funny, interesting, groundbreaking, feminist, or whatever else you look for on stage. All we can guarantee is that women will be present in these productions! 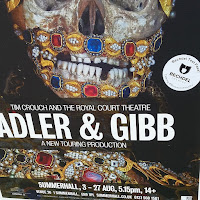 Adler & Gibb - Summerhall 17:15 (90min) (Also at the Unicorn theatre in London, and The Lowry in Manchester)
In preparation for the film role of a lifetime, an actor goes to extreme lengths to dig up the truth. Her subject is celebrated artist Janet Adler, who rejected the art world in favour of a private life. A scaled-down version of the hit Royal Court production.

Bucket List - Pleasance Dome 15:50 (90min)
When her mother is murdered for protesting corporate and governmental corruption, Milagros finds herself with only a bloodstained list of those responsible. Ad Infinitum use physical storytelling, live music and song to tell this tale of love, loss and revenge.

Clean Break double bill: House and Amongst The Reeds - Assembly George Square Theatre 12:00 (90min) (Also at The Yard Theatre in London)
Two plays for the price of one, from the acclaimed company founded by women prisoners.
House: Pat returns to her childhood home after a five year absence, ready to forgive her mother.
Amongst The Reeds: Oni and Gillian have made their home in a disused office block, finding dangerous ways to stay hidden without the authorities catching up with them.

Dani Girl - Greenside @ Royal Terrace 10:30 (90min)
When Dani, a precocious nine-year-old, loses her hair to leukemia, she embarks on a magical journey to get it back. A tale of life in the face of death, hope in the face of despair, and the indomitable power of the human imagination.

Empty Beds - Underbelly Cowgate 13:50 (1hr)
The Wyld sisters tend to avoid one another, today they're trapped on a train 250 miles from home, en route to visit their brother in a psychiatric hospital. Explores the human impact of cuts to mental health services.

Glasgow Girls - Assembly Hall 14:20 (90min) (if you miss it in Edinburgh see it at Citizens Theatre in Glasgow, Oxford Playhouse, Macrobert Arts Centre in Stirling, Theatre Royal Stratford East in London, Dundee Rep Theatre)
Based on the true story of seven feisty teenagers whose lives change forever when their school friend and her asylum-seeking family are forcibly taken from their home to be deported.  They are galvanised to fight for her life, taking on the government and succeeding where others failed, capturing the imagination of the media and inspiring a whole community to unite behind its residents. 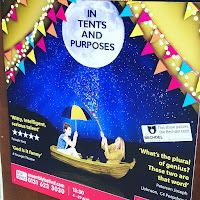 In Tents and Purposes - Assembly George Square Studios 13:30 (1hr)
Comic 2-hander in which Roxy Dunn (also writer of the piece) and Alys Metcalf explore how much power fate and fortune really has on the lives of two just-graduated 20-somethings. They talk about everything from pubes and doggy-do, to 'what would Bridget Christie do?' 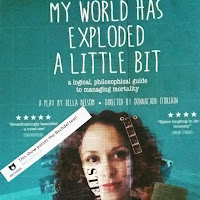 Nel - Pleasance Dome 15:00 (1hr)
Nel is a foley artist who brings films to life through sound. Her story explores identity, friendship and what it means to be an introvert. 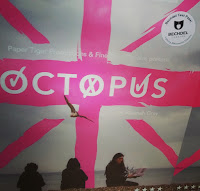 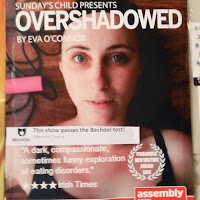 Overshadowed - Assembly Roxy 13:20 (70min) (Also touring Ireland throughout October)
This story of a young woman's experience of anorexia aims to provoke compassion and debate around the subject of eating disorders.

Tagged - theSpace @ Jury's Inn 17:35 (50min)
Tagged follows two girls, Seanette and Lynn, who are caught in a cycle of reoffending and breaching court orders, and explores the issues that cause young people to act out and the challenges that confront them when trying to change.

Two Man Show - Summerhall Northern Stage 20:15 (70min) (If you miss it at Edinburgh see it at Soho Theatre in London)
Subversive and punky RashDash are arguably the angriest feminists at this year's fringe, despite the name of this show and it's declared aim to explore masculinity, these 3 performers are most definitely women and they have a lot more to talk about than just men. 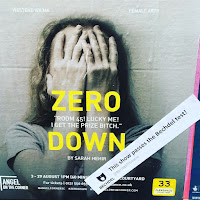 Help - Just The Tonic at the Mash House 11:45 (50min)
Comedy duo Bae want to help you help yourself, in this spot-on spoof of pseudo-gurus out to profit from the quest of the wealthy for health and mindfulness.

Hot Brown Honey - Assembly Roxy 20:20 (65min) (if you miss it in Edinburgh, see it at Hull Truck Theatre and Dublin Fringe Festival)
Widely hailed as THE feminist cabaret to catch while you're in town: a potent punch of hip hop politics, Hot Brown Honey serves up dance, poetry, comedy, circus, striptease and song.


Manic Pixie Dream Girls - Just The Tonic at the Mash House 17:00 (50min)
Stand-ups Sophie Duker and Erin Simmons host a different lady comic every day. These two have great chemistry and provide a fun way to get a taste of some of the funniest female talent at the fringe. 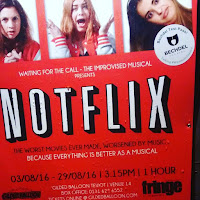 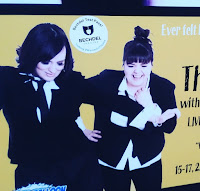 The Guilty Feminist Podcast - Gilded Balloon Teviot Aug 15-17 and 22-24 16:00 (75min) (If you miss it in Edinburgh listen to the recordings at theguiltyfeminist.com)
Deborah Frances-White and Sofie Hagen record their brilliant podcast live at the festival. Each week Sofie, Deborah and a special guest discuss topics "all 21st century feminists agree on" while confessing their insecurities, hypocrisies and fears that underlie their lofty principles. 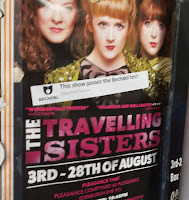 SOLO SHOWS
(Stretching the limits of Bechdel testing to include solo shows that feature more than one female voice in the form of multi-role performances, audience involvement, and recordings)

Alison Spittle discovers Hawaii - Gilded Balloon at The Counting House 13:45 (50min)
Talks to her inflatible palm tree, Pam, and various housemates. Hilarious and heartwarming. Don't expect a tropical holiday, but do look forward to flaunting your Lei for the rest of the fest.

Fabric - Underbelly Cowgate 11:55 (70min)
A tour-de-force performance from Nancy Sullivan in a deeply harrowing play by Abi Zakarian. Sullivan's solo performance as bright-spark Leah explores many female relationships along the way, throwing into sharp relief the couple of toxic men whose behaviour is the main focus of the play. The voices of other female friends and family members reach out to Leah in the form of voice-mail recordings. Brace yourself.

JOAN - Underbelly Cowgate 19:20 (70min)
The familiar story of Joan of Arc is made poignantly touching, sparklingly contemporary, and smartly funny. Expertly performed by Lucy Jane Parkinson aka Drag King LoUis CYfer, whose powerful ownership of the stage combined with endearing vulnerability gains the unerring trust of the audience who she enlists to help tell the tale. Talks to her spirit mentor St Katherine an awful lot.

Lolly 2 - Pleasance Courtyard 18:00 (1hr)
Lolly Adefope's characters are mostly (but not all) women, and definitely all hysterically funny. She begins as a quiz-show host talking to competitor 'Stephanie', so passes the test in the first sentence, and has the most searingly funny sketch of the festival as 'Black Hermione'.

Scorch - Roundabout at Summerhall 18:05 (1hr)
A story of a gender-curious teen. Main character Kes has a moving love affair with a girl and a supportive platonic relationship with a transwoman. Kes is played in a stunning performance by Amy McAllister, but her character doesn't conform to the gender-binary implied by Bechdel testing. On this journey of Kes discovering language that allows for self-identification in a world still sadly associating gender with biological sex, playwright Stacey Gregg exposes how far we have to go before society catches up, and regards Kes and all her real-life equivalents as purely human, without anything else mattering.

Smurthwaite on Masculinity - Banshee Labyrinth 19:15 (1hr)
If you liked the sound of Two Man Show's exploration of the pitfalls of the patriarchy via sharp skewering of hyper-masculinity and so-called manly behaviour, but prefer an intimate stand-up show to interpretive dance, choose Kate. If you like both styles, do as we did and catch both shows. See also: Late with Kate, Smurthwaite's midnight comedy showcase at Canon's Gait.

Sofie Hagen: Shimmer Shatter - Liquid Room Annexe 19:50 (1hr)
Talks to her therapist (who explodes everyone's hearts at the end - in a good way).  A fair bit about men, but crucially not all. Confessional comedy at its bitter-sweetest.

Every effort has been made to include the correct information, but do let us know if we've got it wrong. Happy Bechdel testing!

Posted by Bechdel Theatre at 08:06