What do we want? More parts for women! How do we want them? Complex....

Where are our Willys?

Denise Gough was the latest actor to add her voice, in The Stage this week, to the growing collective cry for more complex and interesting roles for women. In her damning of the idea that a sticking-plaster spate of "strong women" on stage is all we need to balance out the lack of female stories, Gough makes an excellent point:


"The most interesting male characters – think of Death of A Salesman, Willy Loman – are flawed, broken, a bit weak." 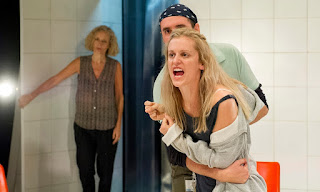 "Yes! She is right!" echo the retweets of audiences, actors and critics alike. But what can we do if the scripts featuring complex women are relatively rarely written or produced? Even in the midst of this forth wave of feminism,  People, Places and Things, in which Gough plays a flawed character that she describes as “a great role for young women to witness" is still sadly an exception to the rule. How can we move on to a time where such a play is praised for it's artistic merit ahead of its brave willingness to test the theory that women on stage make audiences uncomfortable?

The answer of course, is to get more such parts and plays written and produced. We have damned, complained and shamed the faults in our industry with the facts and figures which prove that this is a problem. Now we must follow up by trying to solve the problem, and supporting the people, theatres and shows that are part of the solution.

At this point, it's important to be specific about what exactly we're asking for here - "More parts for women"? "Better parts for women"? This is a common problem of the creative ask - how can we ask for art to be made "better" on a slippery scale of standard that will always be subjective to a certain degree? How can we demand that a writer, director or producer ensure their work contributes to solving the problem of underrepresentation without limiting their imaginative scope or compromising artistic integrity? Great art is not created by focus groups, it can and should not always please everyone, so it's arguably impossible to legislate it without negating the point of it existing.

So, when we are looking at the problem of underrepresentation of women on stage, specifically in terms of quality and quantity of roles (in isolation from wider related issues like lack of women behind the scenes, and non-gendered diversity failures), it's helpful to our cause to be able to express our desire for representation into something easier to measure than "more women" and easier to define than "better characters". This is where the Bechdel test comes in. By asking about 3 low but specific minimums: number of women on stage ("Are 2 women present, in any size cast?"), and level of autonomy and independence from the male sphere ("Do they talk to each other about anything other than men?"), the test asks of a play and it's characters nothing more than to show a basic standard of interaction that makes up a huge part of the real lives of half of the population.

What good will Bechdel testing do?

As a series of questions, the Bechdel test challenges people (creators and audiences) to consider gender representation without demanding change through conformity or legisation. It is not a manifesto or a law, but a provocation to adjust the way we look at art as we make and consume it. It's an encouragement to respond by engaging with the test, not strictly conforming to it. A writer may be prompted to consider a female character's relationships with other women, or changing a non-essentially male name for a female one. Audiences might respond by wrestling with grey areas, saying "Did 10 lines about makeup make a difference? What about that conversation between 4 women about a male baby? Do those characters both identify as women?". These are the kind of diverse responses that change the way we think about, talk about, write and show women on stage, with more detail and nuance than the initial "More good parts, please!".

In the past 30 years, and particularly since it hit the internet, the Bechdel test has "gone viral" in more than just internet-meme sense. It has infected minds across the film industry like an earworm, but in the best possible way. It creates a lingering impulse to constantly check for passing scenes, that once you've started is difficult to stop, and has lead those working in film to delve deeper into researching the Bechdel-effect, proving that as well as causing feminists worldwide to high-five each other upon noticing a "passing" film, such movies often make better returns at the box office.

As a similar industry suffering from similar problems, theatre could do with a bit more of both the high-five-inducing representation-balancing Bechdel passes, and as well as their box office figures. As far as viruses go, the symptoms of this one can feel pretty positive, so if you've been infected by the Bechdel test into celebrating women's conversations, and eagerly awaiting them in everything you watch or read, make sure you pass it on by spreading the word amongst your theatrical colleagues and friends by asking those 3 little questions...

Posted by Bechdel Theatre at 10:47